It’s a Boy for Kiyoko Shimahara!

Thursday, December 6, 2012 No Comments by bw_admin 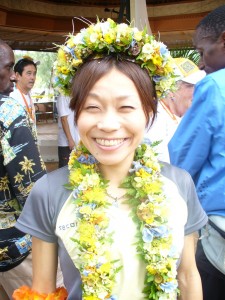 Kiyoko after her (where else?) 2008 Honolulu victory.

Long-time Boulder Wave athlete Kiyoko Shimahara gave birth shortly after noon today (December 6th Japan time) to her first baby, a boy coming in at 5 lb 18 oz and 19″ (2680 grams, 47.5 cm). Mom and son both reported doing well and in perfect health. No name yet for the baby.

Kiyoko was for many years a member of the Shiseido Running Club before leaving to become one of the founding athletes on the independent Second Wind AC in Tokyo. She has enjoyed a stellar career with numerous top 3 finishes in marathons and road races around the world, including victories at the 2008 Honolulu Marathon, the 2009 Hokkaido Marathon, and the 2009 Yokohama Women’s Marathon; silver medal in the 2006 Asian Games marathon; 6th place in the 2007 IAAF Osaka World Championships Marathon; 3rd in the 2009 Chicago Marathon, and a PB of 2:25:11. In comments she released via her Second Wind club today, Kiyoko is leaving the door open to a possible return to training and racing, waiting to see how she feels in the upcoming months.

I feel fine, no slow reactions (I drive a car), there is Buy Zolpidem no sleeping state, no heavy head. 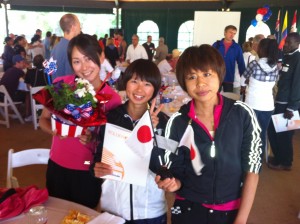 With most attention in the International Team Challenge women’s race at Monday Bolder-Boulder 10K focused on an expected battle among the USA, Ethiopian, and Kenyan teams, the Japanese women are looking to put themsleves in the mix and make it to the Top 3 podium. Kayoko Fukushi (Wacoal/adidas) heads up the team, with a stellar resume that includes the Asian record in the half-marathon (67:26), the Japanese record at 5,000m (14:53.22), a 30:51.81 PB for 10,000m, and a 3rd place finish at last year’s Bank of America Chicago Marathon (2:24:38). Kayoko will be doubling at the 5/10 in next months’ Japan national championships/Olympic Trials. Eri Okubo (Second Wind AC/Mizuno) has been rocketing up the charts the past 12 months – at the 2011 Berlin Marathon in September she improved her marathon PB from 2:35:24 to 2:28:49 for 9th place, and then in February jumped another big step with 2:26:08 for 4th place at the Tokyo Marathon. Last weekend Eri was 3rd at the Gifu Seiryu Half-Marathon, a race won by Boulder Wave athlete Rene Kalmer (Nedbank/adidas). The third member on Team Japan is Yuko Watanabe, who finished 11th at last year’s Bolder-Boulder, followed a month later by a 32:27.89 PB.

The International Team Challenge women’s start is at 11:00 a.m. Monday, with the men going off 11 monutes later. The race winds through Boulder’s streets before finishing at the University of Colorado’s Folsom Field, where many of the estimated 54,000 runners from the citizens’ race will be on hand for the elite finish and the day’s Memorial Day services. 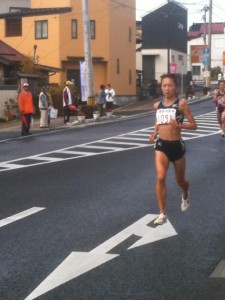 Eri Okubo (Second Wind AC) won the Ichinoseki Half-Marathon in Japan on Sunday in a new Personal Best and Course Record of 71:22. Eri took more than three minutes off her eight-year old PB of 74:27, set when she was 2nd at the 2003 Nagoya Half-Marathon. The new PB comes just three weeks after her breakthrough 2:28:49 PB at the BMW Berlin Marathon. Eri will train at altitude in Albuquerque, New Mexico, from early November with a target of the December 11th Honolulu Marathon. 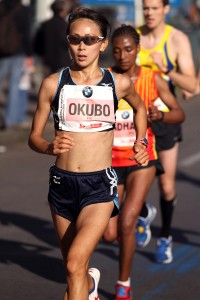 On a perfect running day in Germany that also saw Kenya’s Patrick Makau set a new world record of 2:03:38, Eri Okubo (Second Wind AC) obliterated her marathon PB by over six and a half minutes (!) with a 2:28:49 run for 9th place at this morning’s BMW Berlin Marathon. Her previous best was 2:35:24 at last year’s Nagoya International Women’s Marathon in Japan.

Eri has been in great shape all year, but circumstances have kept her from the breakthrough race until now. She was originally scheduled to run Nagoya again in March, but after the devastating earthquake and tsunami hit Japan 48 hours before Nagoya’s start, the race was canceled. Not wanting to waste her fitness, Eri flew a few days later to Los Angeles, where the Honda Los Angeles Marathon organizers had been kind enough to extend an invitation in the aftermath of Japan’s disaster. The week’s travel, stress, and fatigue combined with a race-day thunderstorm were more than she could handle and Eri ran 2:42:48. Looking to salvage something from the Spring, on the last weekend of May, Eri raced to 2nd place at the Stockholm Marathon in 2:38:58.

The first day I read the instruction. It turns out it cannot be taken for Ambien more than three days in a row.

Eri attacked it from the start today, passing halfway in an aggressive 73:16. Coach Kawagoe was dead-on in his pre-race prediction of 2:28-2:29, which we reported yesterday.

Lidia Simon (ASICS) and Eri Okubo (Second Wind AC) are fit and peaked for tomorrow’s BMW Berlin Marathon, annually one of the world’s fastest events. A year ago, our group featured Tomo Morimoto taking 3rd, and Adriana Nelson in 6th.

As usual, race director Mark Milde has assembled a world class field, including for only the third time in world marathon history, both the men’s (Haile Gebreselassie) and women’s (Paula Radcliffe) world record holders racing in the same event.

Lidia trained all summer in Boulder for Berlin. In tomorrow’s race, she will be looking to post a fast time to put her in strong consideration for selection by the Romanian Athletics Federation for next year’s marathon team for the London Olympics. Lidia is also aiming to become the first woman in Olympic history to compete in five (!) Olympic marathons.

Eri is also in top shape, and Coach Manabu Kawagoe will have her going out at 2:28-2:29 shape, in line for a big PB. In her last marathon, Eri was 2nd in Stockholm in June.

Berlin’s weather forecast for tomorrow is for a temperature in the low to mid-50s at the start, rising to an eventual high near 70 later in the day.

Fans in the USA can watch the BMW Berlin Marathon, either on-line or on television, for no charge. The race will be carried by Universal Sports as follows:

To find the Universal Sports television channel, go to UniversalSports.com and click TV CHANNEL FINDER in red at the top of the page. On broadcast (over-the-air) television it usually a sub-channel of the local NBC affiliation. For instance, in New York City it is 4-4.