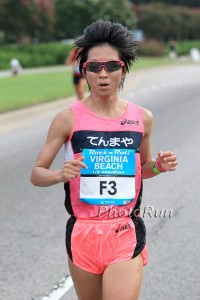 Naoko Sakamoto (Tenmaya/ASICS) has announced her retirement this weekend after running the Kita Kyushu Women’s Invitational Ekiden. Brett Larner of Japan Running News has posted a good translation of an Asahi Shinbun article on Naoko’s announcement.

It’s been my pleasure to work with Naoko from start to finish throughout her career as a pro athlete on Japan’s Tenmaya team. Without question, one of my all-time favorite athletes. Naoko worked hard as heck, as is the case with any Tenmaya runner, and was also one of the friendliest and most social of Japan’s world-class marathoners.

There are all sorts of highlights to point to, any of which would have made for a career peak for most athletes. Naoko first jumped to prominence on the Japanese scene with her breakthrough 2:21:51 at Osaka in 2003, coming third behind Mizuki Noguchi and Masako Chiba on one of the great days of Japanese women’s marathoning. That trio came home in the same order seven months later with a spectacular 2nd-3rd-4th at the Paris World Championships, with only the legendary Catherine Ndereba standing between Japan and a sweep of the marathon medals.

Naoko’s most tremendous run, though, was probably at the Osaka Women’s Marathon the next year. Even with the 4th-place world championship result, she was still without a place on the 2004 Olympic team. On a snowy, bone-chillingly cold day, the lead pack shivered through the half in something like 76 minutes. Naoko brought it home in a sub-70:00 second half (in the days when sub-70:00 marathon splits were still a rarity), including running 30K to 40K faster than her 10,000m PB, to win by over two minutes and lock in the Olympic berth.

The next Spring, Coach Yutaka Taketomi hired me to go over to Athens with them to run on the course a few times and scout out housing for the Olympic Games. The road from Marathon into the city was a complete construction zone, and most of our long runs on the course were on dusty dirt roads that seemed in worse shape then when Pheidippides made the journey. Looking for a suitable Olympic rental, we hit almost every neighborhood of the first 10K of the course, including one place whose elderly owners gave us the full tale of the original Battle of Marathon with maps and all, and then had us sit down and toast the Greek Orthodox Easter with them.

It was completely amazing to see everything had been completed when we arrived back in August for the Games. Our house was just near the 10K mark, with Mizuki Noguchi and her squad right across the road on the Aegean Sea side of the course. The Japanese women struck again in Athens, with all three in the top 7: Mizuko with the gold, Reiko Tosa 5th, and Naoko 7th.

It says a lot about the former depth of Japanese women marathoning that at two of Naoko’s career highlights…4th in those Paris World Championships in 2003 and then 7th in the Athens Olympic Games…she was still only 3rd among the Japanese women.

Naoko’s last race in the US thus turns out to have been last summer’s Rock ‘n’ Roll Virginia Beach Half-Marathon. Naoko came home 6th on VB’s usual hot, muggy summer day; but in the true spirit of all Rock ‘n’ Rollers, she made sure to go out and enjoy the rest of the day, getting in a stint of parasailing in the afternoon and then dancing up a storm at that evening’s Train concert on the beach. 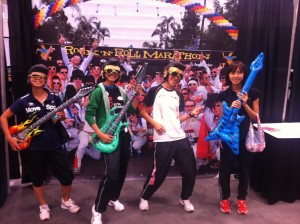 Naoko (2nd from the left) and her buddies at the 2012 Rock ‘n’ Roll Virginia Beach Expo.

I experienced drossiness from Buy Alprazolam only during the first week of reception, I read about it at https://xanaxbest.com, then everything returned to the normal state.

As she comments in the Asahi article translated by JRN: “I still have the urge to get back to the top, but I just can’t do the training I need to get there anymore,” she said. “I decided that it’s time to stop. I’m sad that I couldn’t end it with a marathon.”

Saturday, September 1, 2012 No Comments by bw_admin