John Beattie and Luke Cragg Miles Workout Nice Flotrack piece on John Beattie (adidas) and his buddy Luke Cragg putting in a session of  10 x mile @4:40 27 days out from the Virgin London Marathon.

Athleticos article on Freya Murray (adidas), who is currently training in Boulder, Colorado, in preparation for her marathon debut next month at the Virgin London Marathon. Freya chats about her recent Kenyan training camp, coach Steve Jones, and her return to form after several injuries in 2011. Freya will race the New York City Half-Marathon this Sunday, March 18th. Click here.

A couple of days late on this report, but at the January 7th Hampshire County Cross-Country Championships, Lee Merrien (ASICS) and Louise Damen (adidas) took the men’s and women’s titles, respectively, with John Beattie (adidas) runner-up to Lee by just a handful of seconds. John reports: “Louise won comfortably, and on the men’s side Lee just outsprinted me in the last few hundred yards to win by 4 seconds. Was quite an undulating course and I tried constantly for 12k to drop him at every available chance, though he just wouldn’t go away and held on to find more of a sprint than me in the end! Both of us ran well and were 90 secs clear of 3rd which was encouraging. Nice to have my confidence restored somewhat and start 2012 much better than most of what went on in 2011.”

Click here for a short video report on the day’s racing, courtesy of channelonline.tv 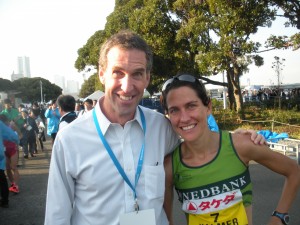 The Yokohama International Women’s Marathon is a done deal. The weather gods weren’t particularly friendly, with temps at 23C (71F) and humidity near 50%. But the starting gun was going to go off at 12:10 pm, regardless.

With a Japanese Olympic berth at stake, Yoshimi Ozaki (Daiichi Life Insurance/adidas) gave it her all, but came up just short in the final kilometer. Today’s heat made the race a classic race of attrition, and by 35K the lead pack was down to three: Yoshimi, the UK’s Mara Yamauchi (who ran a brilliant race of patience, only pulling even with the leaders at about 23K), and Daiuhatsu’s Ryoko Kizaki. Right at 39K, Kizaki threw in a  big move that dropped Mara, but Yoshimi stayed right on her. With about 1500m remaining, Yoshimi threw in her own surge, seeking to repeat her winning move in the last edition of this race. After opening about 10 meters, the gap grew no more. Kizaki stayed tough, drew even with a K to go, and then surged away to win by 2:26:32 to Yoshimi’s 2:26:49.

Yoshimi will almost certainly have to come back for next March’s Nagoya International Women’s Marathon to fight again for an Olympic team spot.

Meanwhile, Rene Kalmer (Nedbank/adidas) was having a phenomenal break-through day. After checking the weather, Rene decided before her warm-ups that it would be a day for racing for place rather than trying to put up an impressive mark. In the end, she got both. Backing away from an earlier plan to target 74:00 for the first half, she instead came through in a very solid and contained 74:58 at 10th place. As planned and hoped, Rene then began taking down other runners throughout the second half, with some impressive running. Her 17:27 split from 20K-25K was the fastest of any of the eventual top ten runners, and her 17:22 for the next 5K was better than all but the lead pack. By 30K she had moved up to 7th, and five minutes later Russian Alevtina Ivanova and Ethiopian Robe Guta were suddenly within range and Rene was up to 5th. The 1:35 gap to 4th looked fairly insurmountable at that point, but Rene continued coming on like a freight engine and was just 16 seconds out of 4th by the finish .

Nevertheless…2:29:59, a nearly five minute improvement over her PB this Spring of 2:34:47. Incredible stuff in today’s conditions. We have to check the stats, but we’re fairly certain this makes Rene only the 4th woman in South African history to break 2:30, and the first to do it in quite a few years. More important, her spot on the South African marathon team for next summer’s London Olympic Games is pretty much locked in. Post race comment: “Now I’m a marathoner. Let’s get some ice cream.”

Louise Damen (adidas) had a very rough day, with a DNF. “We rarely have temperatures like this back home, and I wasn’t at all ready for this kind of weather. There isn’t much that could be done about it and by 10K I was already feeling out of it.”

Next up: off to the awards ceremony and post-race party at Yokohama’s Pan-Pacific Yokohama Bay Hotel.

And the one of our program’s new athletes, Liliana Danci (CS Olimpia Bucuresti), won the 6-kilometer youth title.

When I stopped taking the Xanax Generic drug, I did not feel discomfort or any addiction. I haven’t found a more effective drug yet.

The 2011 SPAR European Cross-Country Championships will be held in Velenje, Slovenia, on December 11th. Before that, Paula and Cristiana will also represent Romania at the Chiba International Ekiden in Japan on November 23rd.

Three of our top women are set to compete as invited athletes in next month’s Yokohama Women’s Marathon, with the full invited field announced this week by race organizers. This year’s race will be the first of three Olympic selection races for Japanese women, the other two being Osaka in January and Nagoya in March.

Leading the Japanese and international field on November 20th will be reigning Yokohama champion Yoshimi Ozaki (Daiichi Life Insurance/adidas). The 2009 Berlin World Championships silver medalist, Yoshimi won the last edition of Yokohama in a course record 2:23:56 and will be competing with the other Japanese women for a berth on next year’s Japanese Olympic team. Great Britain’s Louise Damen (adidas/Winchester and District AC) is also in the hunt for an Olympic spot in the UK after her very fine marathon debut of 2:30:00 at London this Spring. And out of South Africa, Rene Kalmer (Nedbank/adidas) looks primed for a big breakthrough after running the second-fastest half-marathon of her career (71:46) at the Great North Run in September. Yokohama’s November weather should be much more conducive to fast times than were the temps in Prague and the Daegu WC this year for Rene’s first two runs at the distance.

As a note, Yokohama invitee Chika Horie and her Sakura AC teammates just this morning wrapped up a long altitude training camp in Boulder, Colorado, and flew back to Japan with coach Yoshio Koide.

Invited Field (as reported this week by Race Results Weekly)

Xanax Generic is usually well tolerated as is described at https://drbocklet.com/xanax-online/. 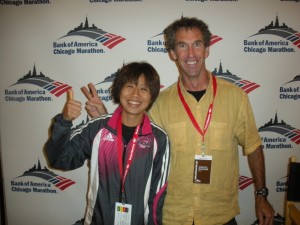 Very good day for our group yesterday. In her first race since signing with Boulder Wave this summer, and her first-ever road race outside Japan, Kayoko Fukushi (Wacoal/adidas) took 3rd place in a huge 18-minute PB at the Chicago Marathon. She was trying the sub-2:20 with Liliya Shobukova and they came through the half together in 69:25; but Kayoko had a lot of “bowel problems” in the second half and had a tough run. Nevertheless 2:24:38 and 3rd place in a World Marathon Majors is a great run. This also gives her a huge boost mentally going into the Japanese Olympic marathon trials, and she will likely race either Osaka in January or Nagoya in March to try to make the team. Patrick Rizzo (Mizuno) did a spectacular job of pacing the lead women’s group through 20 miles (i.e. Liliya Shobukova’s spectacular 2:18:20), afterwards praised heartily by the coaches of both Kayoko and Liliya. This was Patrick’s final long run day (he ended up with 26 miles for the day) as he preps to represent the United States at the Pan American Games Marathon on October 30th.
Lidia Simon (ASICS) and Nuta Olaru (ASICS) went 1-2 at the 5400 ft (1650m) altitude Rock n Roll Denver Half-Marathon. Lidia took the win in 74:54 and departs for Japan later this week where she will race the new Osaka Marathon on October 30th. Nuta was right behind in 75:16, with plans herself for a late-Autumn marathon. Interesting note that Adriana Nelson’s sister-in-law, Brianna Nelson, who recently qualified for the US Olymopic Marathon Trials, took 3rd in Denver.
I drank valerian, motherwort, but it did not help. And then she advised me https://ambienpro.com those pills.
In Johannesburg, South Africa, Irvette van Blerk (adidas) took the final Spar 10K title race of the season in 34:22. The Joburg course was also at altitude (5740 ft/1750m) with hills thrown in the boot. Irvette’s next race will likely be the Great South Run 10 mile in the UK at the end of this month.
Tagged adidas, ASICS, Bank of America Chicago Marathon, Irvette van Blerk, Kayoko Fukushi, Lidia Simon, Nuta Olaru, Pan American Games, Patrick Rizzo, Spar 10K, Wacoal

54,000 runners take to the streets of Newcastle Sunday morning for the Bupa Great North Run, and we have have a trio of athletes set to toe the line: reigning South African women’s half-marathon champion Rene Kalmer (adidas) looks to rebound from what she considered a disappointing performance in Daegu, while Brits Freya Murray (adidas) and John Beattie (adidas) will make their debuts at the distance. Last autumn when Freya and John took their first steps up to ten miles, they came away with a pair of impressive debuts at the Great South Run: Freya rocked that course in 52:27 for 2nd place, while John Beattie took 10th on the men’s side in a solid 48:59 debut.