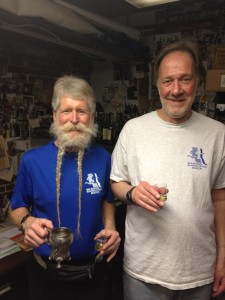 Very sad news today from Toni Reavis that Jason Kehoe has passed away. Jason was one of the mainstays of the Boston running community whom I knew in various iterations over the years: first as one of the original staff at the Bill Rodgers Running Center in Cleveland Circle when it was as good as Mecca for aspiring distance runners and running bums; then as a housemate; then as a permanent fixture of the Boston running community whom I would usually meet when in town for the marathon or any other excuse.

My first year out of Boston College, while earning farm wages for Thom Gilligan in his newly-founded Marathon Tours business and trying to figure out “What’s Next?”, I ended up sharing a house with three other runners: Doug and Ruth Sweazey, and Jason, as well as Ruth’s cat and Jason’s dog. Doug and Ruth catered to the running-tourist clientele at the Bill Rodgers’ Running Center down at Quincy Market, while Jason manned the fort with Charlie Rodgers (Bill’s brother) and a WKRP-In-Cincinnati type of staff down at Cleveland Circle. The house was a big old mansion next to the Brookline Reservoir just outside Boston city limits, owned by an Iranian immigrant named Albert, who to this day I am certain hightailed it out of Iran about the same time the Shah went down. The four of us and the animals occupied the old servants’ quarters up on the top floor.

Jason exuded a Zonker Harris vibe, laid back while simultaneously rarely keen to suffer fools for any longer than necessary. In his article attached here, Toni relates the perfect Jason memory, which anybody who has worked retail can appreciate:

“It’s brutal being polite to people all day,” said the assistant manager [Jason] to a passing friend headed to the locker room in back for the weekly Saturday run. “In fact,” he concluded sardonically, “it’s not healthy. You’re not being honest.”

That said, Jason was always polite as can be to everybody in my family, including my Dad, who, long after Jason, Bill Rodgers, and Charlie Rodgers had graduated from Newington High in Connecticut, became the head cross-country and track and field coach at Wethersfield High School, the next town over. Invariably whenever my parents had spent a day in Boston and stopped by the Quincy Market store, they’d relay a message to me about how friendly and welcoming Jason had been.

Years later, when I had begun working with Japan’s top distance runners, Jason shared a story of Toshihiko Seko coming into the Cleveland Circle store in during the week of the 1981 Boston Marathon with an entourage of coaches, media, and other handlers. “That was the fittest-looking human being I have ever seen,” Jason told me, despite the fact that one of his dearest friends on earth, Bill Rodgers, had been fit enough to win four Bostons, four New Yorks, and one Fukuoka during his phenomenal career. Jason called ’em as he saw ’em.

As much as anybody I know, Jason was a guy completely comfortable in his own skin and his own routines. As Toni quotes him, “Personally, in my own life, I try, with my own limited interaction with the world, to do it with integrity, and earn what I get, and don’t ask for more than I’ve earned – which seems to be an exception.” The past ten days, I’ve been reading a book titled In Pursuit of Spenser, in which a dozen or two authors share their reminiscences of the late Robert B. Parker and his famous literary creation, the Boston private eye Spenser. Each and every writer comes back to the same theme, that Spenser was a guy who had figured out how to live Life on his own terms, which included his integrity, and what more could he ask for. That approach seems to have worked well for Jason.

I completely lost the regime of the day, i.e. I did not sleep at night and insanely wanted to https://disabilityarts.online/ambien-10mg/ sleep during the day.