Freya Ross’ Comments on Withdrawing from the Virgin London Marathon 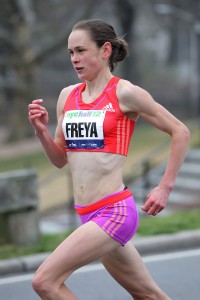 Freya Ross in action at the 2012 NYC Half-Marathon (Photo by PhotoRun, Inc. All rights reserved)

As reported earlier by the Virgin London Marathon organizers, Freya Ross (adidas) has had to withdraw from this year’s race. It was a tough decision for Freya, who debuted in London in a wonderful time of 2:28:10, and then followed up by being the top UK finisher in the Olympic Marathon, despite being called in to replace Paula Radcliffe just a week before the race.

Freya’s comments on the decision:

“I’m really disappointed I’ve had to withdraw. Training had been going well for the last few weeks and I was looking forward to running in London. The injury problem started last Monday with a niggle in my right hip, it seemed insignificant and I didn’t think it would affect me. However, over the next few days it worsened and I now can’t run pain free. Between myself, Steve [her coach Steve Jones], and the Physio I’ve been seeing, we had to make the decision yesterday that I would not be able to run the marathon. The Physio thinks it is probably a small strain around the top of my hamstring/glute. She thinks that it will improve quickly with rest.”

Maybe it is better, because I don’t want to get hooked on Buy Alprazolam pills, and it hasn’t turned out so tragically.